We are pleased to announce that Absen has been shortlisted as a Technology Finalist at the AV Awards 2020 in the Event Technology of the Year category for the newly launched Venus LED series. With hundreds of entries, we are proud to be recognized by the highly respected industry awards, which celebrate the best technologies and projects across the global AV industry.

The Venus series is a Red Dot award winning product, an innovative LED display specifically designed for concerts and festivals with the ability to create super-sized screens at speed. Featuring a highly unique integrated ‘module-on-frame’ design, Venus is 27% lighter than competing solutions, allowing creative teams to cut back on weight, save cost and build even bigger LED walls than before – up to 20 meters in height.

The series has been designed with safety and convenience in mind. Its carbon fibre pipes with anti-slip coatings and additional safety hooks ensure the safety of climbers at every step of the building process. Wind bracing is also available and can withstand gale force winds of up to level 8.

An event like no other, the Fête des Vignerons is held once every 20 years at a temporary stadium at the edge of Lake Geneva. Absen and Alabama worked together to deliver the world’s biggest LED floor for this once-in-a-generation Swiss spectacular.

A temporary 20,000-person arena was constructed in the Swiss town of Vevey to house more than 5,500 volunteer performers and 900 singers and musicians from the area.  With heavy vehicles such as tractors being driven on the surface while cows, horses and carts and goats were led around the arena, it was essential the 3,132-panel LED floor was robust. Extensive tests were carried out in extreme conditions before the team opted for 66 tonnes of P7.8mm, 5,000 nits LED floor panels from Absen.

As well as covering almost the entire floor area with outdoor LED, the company supplied 150 sqm of Absen P5 outdoor LED screens in the form of columns at the top of four stages.

This project was accomplished by Eclipse Digital Media, featuring Absen’s XD series 6mm LED displays. The Bridge has been digitally enhanced with LED screens and a bespoke lighting system that are connected to offer a fully integrated digital walkway to and from Wembley Park.

The system includes over 100 sqm of Absen XD6 LED panels in two high-resolution outdoor LED configurations, fitted to the northern and southern parapets of the bridge. Under the bridge, there are a series of LED lights behind diffuse glass panels to create a ‘dot’ effect, in keeping with the original tile artwork at the site, and finally, low resolution LED strips have been spread out across the ceiling in linear rows.

By adopting a strategy based around consistency and simplicity, integrator AVMI helped WTW achieved a standardized and seamless user experience across the globe. Cutting-edge audio and visual technologies were utilized throughout the building, including an Absen HDV 3.2m x 1.8m P1.6mm LED videowall in the reception displaying public-facing content and marketing material. 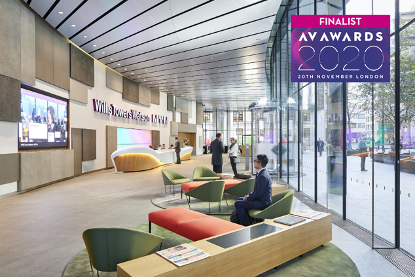 The awards ceremony will take place on 20 November at Evolution London where winners will be announced. Congratulations to all the Finalists!