Absen and Alabama combine to deliver the world’s biggest LED floor for a once-in-a-generation Swiss spectacular.

Rüsselsheim (Germany), 23rd September 2019 – An event like no other, the Fête des Vignerons is held once every 20 years at a temporary stadium at the edge of Lake Geneva. The celebration, which features a vast troupe of performers donning elaborate costumes, as well as animals and vehicles, is held every day for a month to honour the winegrowers of the region, which stretches from Lavaux to Chablais in Switzerland.

Organised by the official Brotherhood of Winegrowers – la Confrérie des Vignerons - the show represents a year in the life of the vineyard through 21 action-packed scenes. This year’s event also received a technological boost in the form of a gargantuan LED floor from Absen, provided by rental house, Alabama. 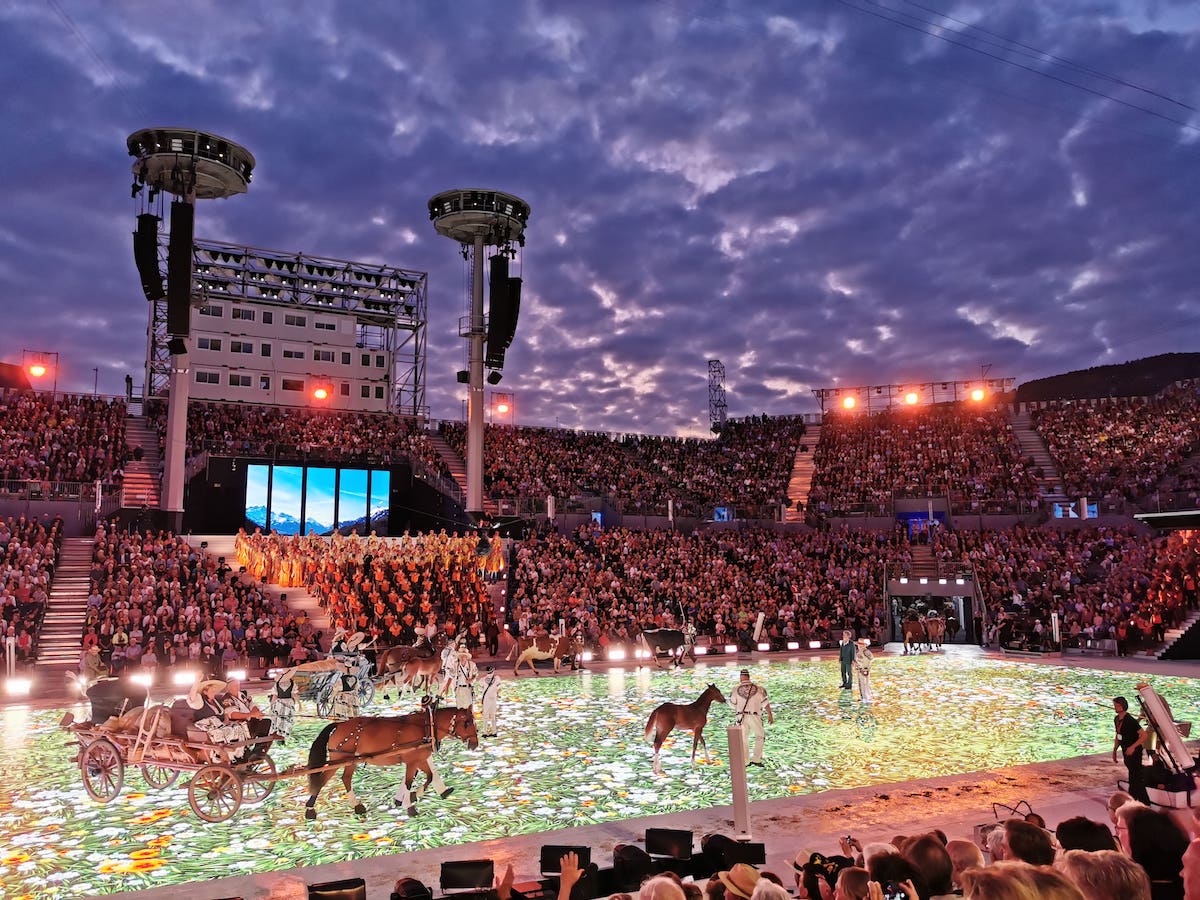 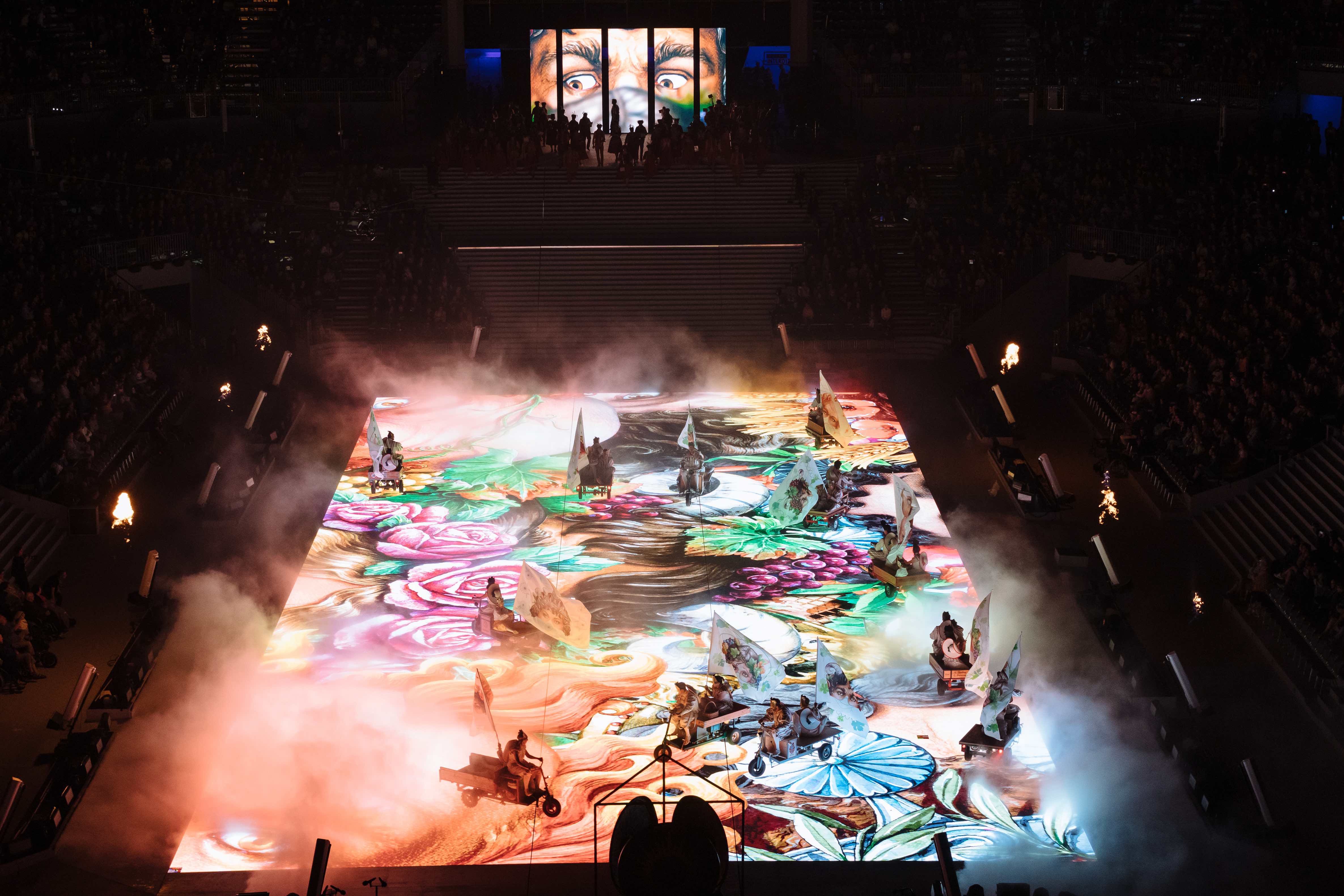 Record Breakers As two decades have passed since the last Fête took place, the 200-strong technical team had to ensure that the 2019 edition lived up to expectations, as well as demonstrating the best of the last 20 years in live event technology. 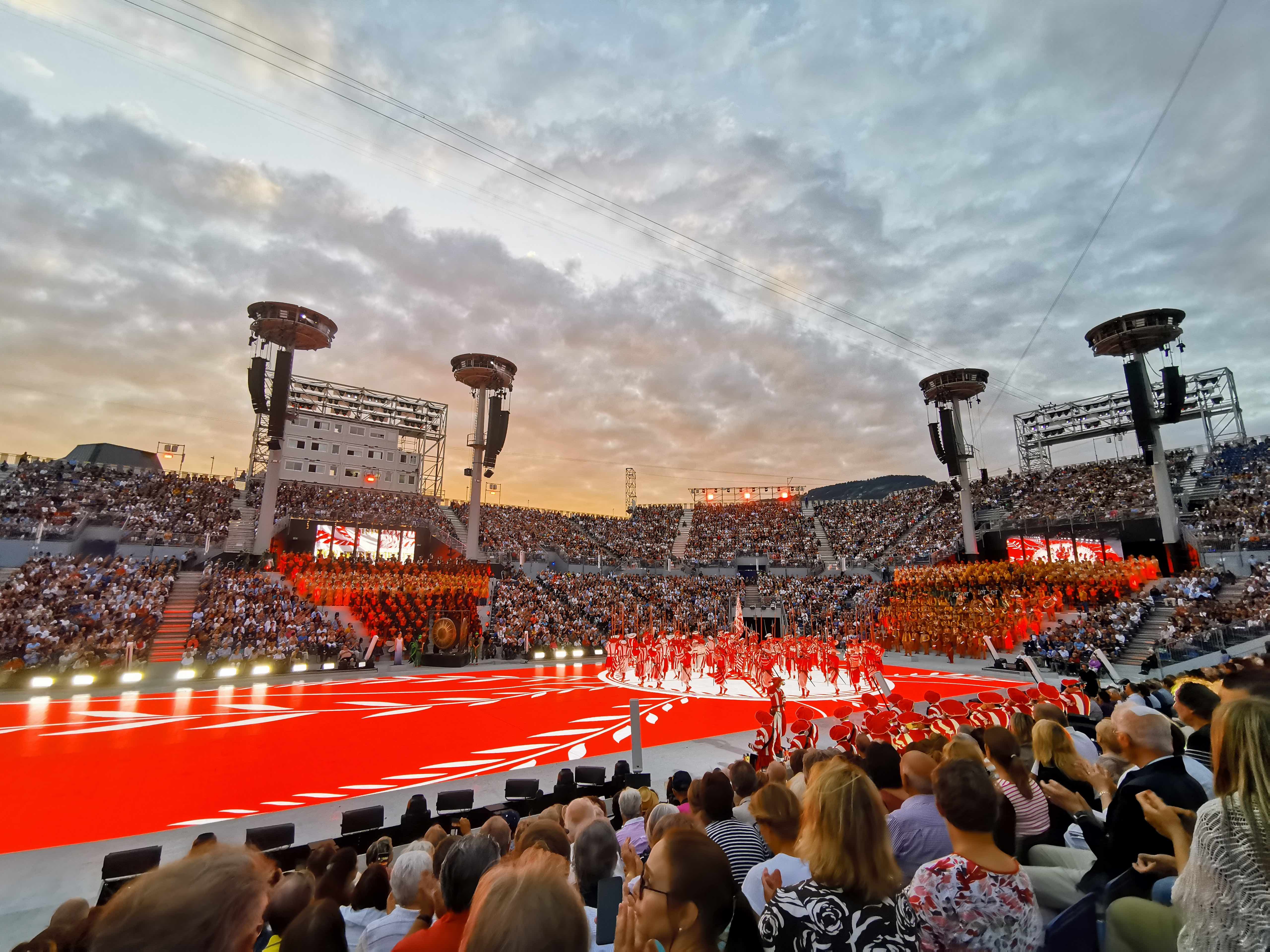 With this in mind, a temporary 20,000-person arena was constructed in the Swiss town of Vevey to house more than 5,500 volunteer performers and 900 singers and musicians from the area.

“I grew up in the area and everybody around this region knows about the Fête des Vignerons because it is so unique,” said technical director, Francois Mottier.

After the installation of the first technical elements in May 2019, the project evolved for budgetary reasons as well as from a creative perspective to guarantee it was in line with the vision of artistic director, Daniele Finzi Pasca - the designer behind the Olympic Games opening and closing ceremonies in Turin and Sochi as well as some Cirque du Soleil productions. To allow the technical team to understand the key themes and narrative, workshops were carried out alongside event organiser, Confrérie des Vignerons.

As they requested both day and night-time shows, a more powerful visual solution than high-end video projection was required, which sparked Mottier’s suggestion to incorporate an LED floor.

“I was already in contact with French event specialist Alabama, so I asked for their product recommendations,” he said. “We pushed to move in the direction of LED because we wanted to use something different and believed it was capable of adding plenty of visual power to the show. Plus, at 800 sqm, it would become the biggest LED floor ever deployed for an event.”

With heavy vehicles such as tractors being driven on the surface while cows, horses and carts and goats were led around the arena, it was essential the 3,132-panel LED floor was robust. Extensive tests were carried out in extreme conditions such as high temperatures to ensure the floor would be hard-wearing and perform well in the sun before the team opted for 66 tonnes of P7.8mm, 5,000 nits LED floor panels from Absen.

The product was co-developed with Alabama, which supplied all video equipment for the arena. As well as covering almost the entire floor area with outdoor LED, the company supplied 150 sqm of Absen AT5 Pro outdoor LED screens in the form of columns at the top of four stages; provided a visual technical control system and several Smode media servers; and installed a camera system and return monitoring to ensure a smooth running show was delivered to all screens.

Headed up by Alabama’s CEO and project manager for the Fête des Vignerons, Dominique Lassarat, the process of developing the product involved creating LED technology that would guarantee images could be clearly seen even during performances taking place in daylight as well as offer controlled electricity consumption.

A large fan pushing cold wind from the lake underneath the floor helped cool the surface by using small micro particles of water that evaporate to reduce the heat. Additional fans were positioned above ground around the edge of the floor to control fog used in the production.

“The system was efficient and even on the hottest day, which brought the LED floor temperature to around 75-degrees, we had no problems,” said Mottier. “I’ve only worked with LED floors on a smaller scale so this was something really special. We built a slope at the edge to drain the water and constructed a 20-metre long LED platform which could be raised and lowered using a hydraulic system, allowing performers and elements featuring in the show to enter and exit the arena.”

Using LED also allowed the production team to display markers for Finzi Pasca and the choreographers, indicating where performers should stand and objects such as trampoline mats should be placed.

To guarantee the floor would perform in the most demanding condition, direct sunlight, tests were carried out in an outdoor theatre using a 3,000 nits version of the LED floor product.

“I was concerned it wouldn’t be bright enough so a 5,000 nits version was developed which is waterproof and can hold five tonnes per square metre,” said Bashiba’s Roberto Vitalini, the content creator responsible for the stunning visuals displayed on the LED floor.

“A horse managed to crack the concrete floor around the edge of the LED floor which stayed intact. This really shows how durable the product is.”

Due to the distance the audience would view the floor from a pixel pitch of 7.8mm was decided upon. “The smaller you go, the more fragile it becomes and the bigger you go, the less brightness and power you get, so we needed to balance that,” added Lassarat.

Using a floor made up of 13 million LEDs – supported by another 5v million LEDs around the edge - the team could guarantee an impressive show, even during the day. When used as an effect in combination with lighting the floor could also backlight the performers.

“During our evening productions the LED is at 40% power whereas in the day it is operating at 100 per cent. It’s the beginning of an exciting new era where screens are visible during bright daylight,” said Vitalini.

Around the edge of the stadium, 200 panels of the Altaire AT5 Series - Absen’s 5.5mm, 4,500 nits ultra-lightweight touring LED - displayed content which complemented or mirrored the visuals on the floor or close-ups of performers. The product was selected in part due to its Common Cathode Technology which requires low power, offers low heat dissipation, high refresh rates and reduces pixel failure. Alabama worked alongside Absen once again during the R&D stages to ensure it was strong and light and helped develop a back frame to speed up rigging. 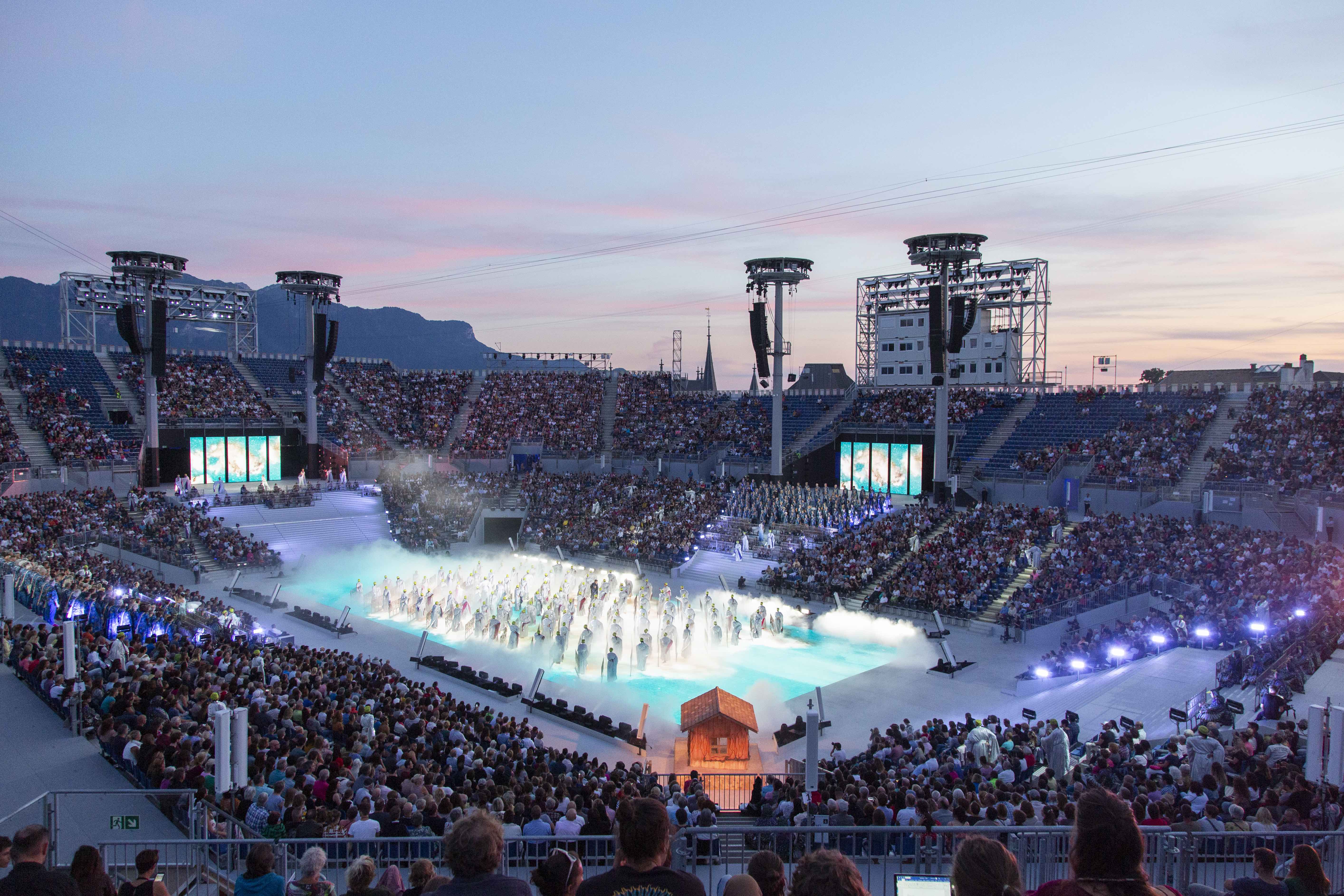 In the control tower the Smode media server offered advanced control and easy adjustment of the LED floor and bordering panels’ content brightness during the day and night shows.

Mottier concluded: “It’s now comparable to an opening or closing ceremony but even more extensive than some as this is taking place every day for almost a month. In the last 20 years the advances in fibre optic technology, LED and the capabilities with sound make working in a space such as this incredible.”